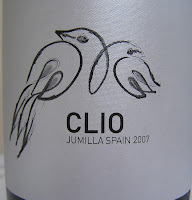 Anticipation was high for a great dinner to kick off the weekend: wild game and 2005 Bordeaux. So when the so-called value bottle was a bust, we reloaded with a sure thing: 2007 Bodegas El Nido Clio from Spain's Jumilla.

Jumilla, a sure thing? Until recently, the Jumilla region was known for cranking out bulk wines that were hardly worthy of the praise and points awarded to northern Spain's superstars - Tempranillo from Rioja or Garnacha from Priorat. But change is afoot in today's Spanish southland.

Dark purple in the glass, the Clio unfurled toasty aromas of dark fruit and violets that promised a gamey mouthful for the wild bird. And meaty it was, plush with blackberry fruit layered by smoke, leather, anise and a long, savory finish. Despite its heft, the wine's fresh mineral streak and balanced acidity made each bite o' bird even more delicious. After it was all gone (so sad), we were surprised to see the alcohol content listed at 15% as it didn't feel hot at all.

Sun-scorched, arid Jumilla straddles the Murcia region of southeastern Spain near Alicante. Bolstered by the efforts of wine importer Jorge Ordoñez, Jumilla's wine cred is on the rise as local winemakers combine their know-how with vintners from other successful Spanish winegrowing regions. Bodegas El Nido also benefits from its relationship with Chris Ringland, the iconic Barossa vigneron.

Ringland spreads his lush winemaking style across a range of prices, from his luxe R and Three Rivers wines to the moderately priced Garnacha, Bodegas Alto Moncayo "Veraton" Campo de Borja, and one of the best values in red wine, Pillar Box Red.

Now that we've tasted the Clio, we can only dream of landing a bottle of Bodegas El Nido El Nido Jumilla, which will set you back a C-note plus. At around $45, the Clio might give you pause but it's sure to get your weekend off to an unforgettable start.
Posted by Till at 3:43 PM