Swinging into Spring at Bing's 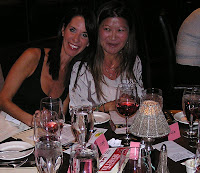 Winewomen and friends filled Bing Crosby's banquet room last week on the first day of spring. Tables sparkled with rosy reflections cast by rays of late daylight that shone upon our aperitif – 2009 Mulderbosch rosé of Cabernet Sauvignon. The pretty South African rosé was watermelon-fresh with cherries and fresh strawberry on the palate and light spice on the finish. We were off to a lovely start.

Lisa Wherry introduced the evening's wines from The Estates Group and Cape Classics. She held up an article in the latest issue of Wine Spectator about groups and vintners who foster social justice programs in South Africa's wine industry. Next, James Martinez cued us in about Stroke Recovery Center, our March charity. Families tell us about the remarkable work they do for clients living with the aftereffects of stroke. Thank you, all.

Appetizers arrived along with Indaba 2009 Chenin Blanc to give us a taste of South Africa's most widely planted wine grape. Despite being under-chilled, we could still enjoy the lemon-scented, stone-fruited delight from the Western Cape. That made two wines already checked off on our order list.

A pause in the dining action gave the happy-footed party crowd time to break into full swing on the dance floor. Lady in Red danced with obvious joy, all poised in lock step with her sinewy partner. Didn't she look fabulous?

Bing's staff made a grand entrance as they hoisted platters of massive half-chickens that quieted a few tables. Hmm, the salmon and short ribs folks wondered, what's up with that? No worries – the salmon and shorties were big in rich flavors that satisfied just right. Meats paired well with medium-bodied 2007 Excelsior Cabernet Sauvignon, the best-selling South African cab in the United States, juiced by a small amount of Syrah and Petit Verdot.

Our server, who nearly swooned as she described Bing's crème brulee, swayed even suckers for red wines with chocolate desserts. One bite and we understood. Its creamy texture was divine. A firmer-than-expected taste of the ultra-rich chocolate decadence mousse proved a chocolate-lover's dream. It too paired quite well with 2009 Jam Jar Sweet Shiraz, which we found pleasantly jammy, rather than truly sweet.

The room was half-full when our dining group headed home. From the looks of it, the other half was still jumpin' on the dance floor. Happy Spring to all!
Posted by Till at 9:19 AM No comments:

Get ready to pour it on at the first Coachella Wine Festival the weekend of April 9 through 11 on the grounds of the Miramonte Resort and Spa.

The three-day event kicks off Friday evening, April 9 with your choice of a celebrity winemakers' dinner or a sweet-tooth soirée.

Join Olympic legend Peggy Fleming with husband and winemaking partner Greg Jenkins for their winemaker dinner starting at 6:30 PM. Peggy and Greg will describe their unique wine journey as you taste their high-scoring Fleming Jenkins wines. Savor Chef Robert Nyerick's farm-to-table cuisine during this intimate outdoor dinner served amidst Miramonte's citrus and herb garden. How special is that? Seated limited to 40 guests – see ticketing info below.

Also on Friday, you might choose instead to reserve a spot for the Just Desserts Soirée that takes place from 7 to 9 PM on Miramonte's Mediterranean lawn. Enjoy delicacies and treats from the valley's lauded pastry chefs and fine restaurants that will be served with sparkling and still wines paired to perfection as you enjoy the sweet sounds of live jazz under the stars.

Sleep tight so you can dive into the weekend's Grand Tasting and events Saturday and Sunday from 1 to 5 PM. More than 20 wineries will be represented, including hand-crafted gems from Truchard, Roessler, Ahnfeldt, Vina Robles, B Cellars, Laird Family Estate, Fleming Jenkins and many more from boutique Old and New World producers. Check the Web site as more wineries sign on to this not-to-be-missed event. Get to know the winemakers and visit with some of the valley's top chefs as you savor their inventive dishes on Miramonte's picturesque grounds framed by the majestic Santa Rosa Mountains.

All the while, you'll be enthralled and entertained by fine art, boutique shopping and live music. Enjoy a tasteful, tranquil weekend of gustatory delights with other wine and food enthusiasts in a postcard-like setting energized by spring's vibes, creativity galore and the pleasures of the vine.

Event producers Kajon Media will donate a portion of proceeds to Habitat for Humanity of the Coachella Valley, the local affiliate of the international organization that provides safe, affordable housing for families in need.

Tickets for individual events and day passes are on sale now. Reserve early to ensure admission, best-pricing and access to limited-seating events such as Friday's celebrity winemaker dinner, limited to 40 guests.

Information and tickets available online at www.coachellawinefestival.com or by calling 1.760.799.7076. See you at the festival!
Posted by Till at 11:54 AM No comments:

Founded in 1988 by four wine-dedicated friends Donald Patz, James Hall, Anne Moses and Heather Patz, Patz & Hall winery turns out single-vineyard Chardonnays and Pinot Noirs. Their wines are sourced from fruit grown in diverse terroirs centered in Sonoma yet tapping into bordering Napa with its Hyde Vineyard releases, Mendocino to the north and, with its Pisoni Vineyards wines, Monterey County's Santa Lucia Highlands to the south.

Anne Moses kicked off the tasting by introducing the premier of the winery's 2008 Sonoma Coast Chardonnay, an easy-drinking cool-climate chard with fresh stone fruit aromas and flavors braced by crisp acidity and minerality. Think fresh and food-friendly.

Next came our tasters' favorite: 2007 Chardonnay Hyde Vineyard. Rich with exotic fruit yet refreshing for its minerality and cleanliness on the palate, we enjoyed its elegance without overkill. As it turns out, wine critic Robert Parker agreed. He awarded this wine 94 points, the highest of all the Chardonnays tasted.

The last white was their 2007 Chardonnay Hudson Vineyard, a richer, more full-bodied chard with toasty oak and candied fruit. Not our style but still a Parker 93-pointer. Patz & Hall cognoscenti advised us to hold on to this one at least another year or so to enjoy it even more. We believe!

On to Pinot Noir after a bite of Patricia Hook's mushroom crostini that kept us going. We started off with the 2007 Hyde Vineyard, the Carneros vineyard site that delivered our favorite Chardonnay. Once again, it was Hyde: a deliciously full-bodied wine with dark cherry and wild berry fruits laced with cinnamon, spice and a savory finish. What, only 92 points? Who cares, we thought.

Next, the 2007 Pinot Noir Chenoweth Ranch. This beauty from the Russian River Valley was deep, with more brooding fruit and a spiciness that pushed this taster's envelope. The Spectator gave it one more point than the Hyde.

The closer was the complex 2007 Pinot Noir Pisoni Vineyard from Monterey's Santa Lucia Highlands. The full-on mouthful was rich with chewy black and red fruits, definitely the power-Pinot. The Wine Spectator agreed with its 94-point anointment.

Blind to prices and points, this taster favored the Hyde Vineyards' Chardonnay and Pinot Noir, but knew the Pisoni would win out when served with a perfectly paired pork tenderloin dish. Other tasters compared the spicy Hyde and Chenoweth Pinots to Zinfandel – Zinfandel?! Ouch. Goes to show it's all about your palate, your taste – points and tasting notes be damned.

Thanks to all who made this happen: Patz & Hall, Patricia Hook and her Firecliff staff, Patrick and the gang at LA Wine Company and all the interested wine lovers who took the time and pleasure to taste, compare notes and share.

You'll find Patz & Hall wines on better wine lists around the valley. Seek them out, try them all. There's not a mediocre offering among them. Treat yourself.
Posted by Till at 10:31 PM No comments: