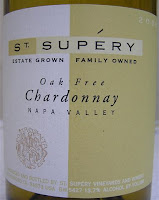 We posted holiday gifts ideas for the wine lovers in your life on our Facebook page today. They include a WinewomenPSP one-year membership that includes a fabulous custom-designed sterling silver and Swarovski crystal wine bottle necklace, gift certificates to our local wine merchants and gorgeous hand-painted wine aerators that bring taste and festive color to your holiday table.

If your wine lover is really special, you might treat him or her to a wine club membership. With wine clubs springing up all over, it can be hard to know where to begin. Here are a few ideas for wine clubs that deliver the goods – excellent and intriguing wines, from travels and tastings over the years.

Byron Wines
We have yet to taste a Byron wine we didn't love. The focused portfolio of this Santa Barbara County winery features a range of styles in Chardonnay and Pinot Noir from a variety of vineyards. They also make a delicious Pinot Blanc and Pinot Gris. You can order only Pinot Noir or a mixed collection from their wine club. Either way, you'll get to know beautifully textured and balanced Byron wines. Club members also receive special invitations, which gives you another good reason to visit Los Olivos.

Oregon Pinot Noir Club
Former journalist and owner Bob Wolfe is an avowed PinotGuy and engaging wine writer. Wolfe makes it his business to uncover gems and values from Oregon's best Pinot Noir producers, big and small. OPNC offers two wine club tiers: World Class and Premium. Choose Premium and your summer shipments will automatically be held until the weather is cool enough for safe transport. OPNC also offers other types of Northwest wines from whites to exotic blends and special bottles from Burgundy. If you're serious about Pinot Noir, this your club.

St. Supéry
Napa's family-owned St. Supéry has a remarkably broad portfolio, and it's all good. Their Sauvignon Blanc and Cabernet Sauvignon are two sure bets you can find at Vons and Albertsons. While they're both good and excellent values, they only hint at St. Supéry's quality reach. In fact, the limited edition 2006 Rutherford Cabernet Sauvignon drinks so well that you could enjoy it alone, or with a wedge of cheese. We didn't encounter a single ho-hummer among the many we tried at their Napa tasting room, from single-varietal whites to elegant white and red blends. They also make a juicy rosé and a fresh, light Moscato to end your holiday meal with a kiss of sweetness. The Wine Club offers discounts, special events and a choice of all red, white or one-and-one shipments. The Divine Club is for lovers of robust reds, and St. Supéry makes quite a few that are indeed, divine. Ask about their new Case Club with special discounts on case purchases.

Other wineries with clubs that tap into terrific portfolios are Andrew Rich, Beringer and Maryhill. Do you have a favorite wine club we should know? Tell us what makes them special and we might include them in another post. 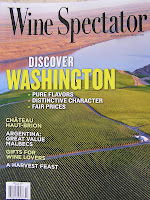 Pick up the December 15th Spectator and start your own Washington wine discovery. Wines by Leonetti, Cayuse, Woodward Canyon, Tamarack Cellars, Pepperbridge, Buty, K Vintners, Abeja, Walla Walla Vintners and Otis Kenyon are just a few you won't want to miss. Give your 'buds a treat, Washington style.
Posted by Till at 10:51 AM No comments: